At this time of the year one of Ireland’s most distinctive mammals, the hedgehog will awaken from its winter slumber. The hedgehog was named because of its peculiar foraging methods while rummaging in the undergrowth, it emits pig-like grunts—thus, the name hedgehog!

The hedgehog’s main line of defence is the possession of spikes which cover all of the upper body with the exception the face, chest, belly, throat and legs which are covered with a coarse, grey-brown fur. An adult hedgehog possesses an average of 5000 spikes.

The hedgehog is described as being omnivorous, feeding on a varied selection of invertebrates and such as slugs, snails, beetles and caterpillars. They also feed on fruits and berries, especially in the early autumn when these food sources are readily available.

Hedgehogs typically breed between March and October. After a gestation period of about 32 days, three to five hoglets are born! All wild hedgehogs can hibernate, though not all do, depending on temperature, species, and abundance of food.

Hedgehogs can be of great benefit to both gardeners and farmers alike. Its preferred diet of slugs and snails reduces the need to use synthetic pesticides. However, deaths from poisonings are well documented as the hedgehog feeds on a large variety of pest species resulting in prolonged exposure to toxic chemicals and inevitably death. Despite being afforded legal protection (Irish Wildlife Act 1976 / 2000 & Bern Convention Appendix III), changing land use practices coupled with road construction and increased levels of traffic has meant that hedgehog populations have begun to decline. 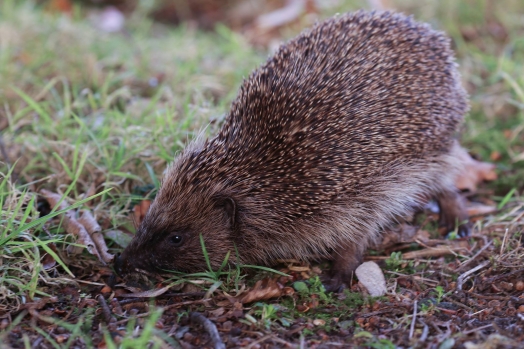 The following are some tips to help encourage and protect these welcome garden visitors:

Fossil remains confirm the presence of hedgehogs on the European continent 15 million years ago. Their existing home range has seen the spread of this species to as far as Northern Russia. The origins surrounding the arrival of the hedgehog in Ireland is often disputed by many naturalists suggesting that it arrived via a land bridge after the last Ice age. Alternatively, it may have been introduced by humans at a later date. The hedgehog is now found throughout the island of Ireland having originally been restricted to only occupying deciduous woodlands. The presence of a sufficient prey population coupled with its adaptability has facilitated the movement of this species into an array of habitat types in recent centuries. Uplands and mountainsides are not popular, probably because they lack both suitable food and suitable nesting places. Hedgehogs are well established in our urban habitat and can, somewhat surprisingly, survive very well in our cities, making extremely good use of cemeteries, railway land, wasteland and both public and private gardens.

There are some 15 species of hedgehog in Europe, Asia, and Africa. Hedgehogs have also been introduced into non-traditional ranges such as New Zealand.

If attacked they will curl into a prickly and unappetizing ball that deters most predators with the exception of the badger and a selection of birds of prey. They usually sleep in this position during the day and awaken to search for food at night.

Within two to three weeks of the hoglets being born, their eyes start to open and spines begin to grow on their backs. Hoglets become independent at six weeks old and then pursue a solitary lifestyle.

We all have a role to play in protecting and ensuring the long-term survival of this unique species. Easy steps can be taken to help conserve hedgehogs some handy tips are given in the blog piece above.