Yesterday Eagle Athletic Club donated €5,000 to Fota Wildlife Park from the annual Cheetah Run which raises funds annually for the Wildlife Park, a conservation charity organisation. The money raised will be used to support an on-site native species conservation programme for the Curlew. 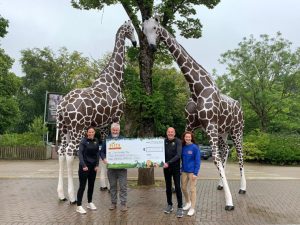 Fota Wildlife Park is a not-for-profit organisation, which operates as a zoological visitor attraction whose vision is to is to inspire people to understand and conserve the biodiversity of our natural world.

The Eagle AC 5K Cheetah Run has taken place yearly since 2009 and has recently expanded to include a separate 1-mile run for younger runners. As well as being a fun and uniquely set road race, it is also a fundraiser for Fota Wildlife Park and the monies raised go towards a specific conservation project. 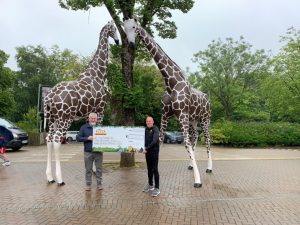 Sean McKeown, Director of Fota Wildlife Park said “We’re absolutely thrilled and humbled by the great fundraising done by the Eagle AC committee, race organisers and supporters year after year. We would like to say a huge thank you to all involved, especially as this was the first year the race could be held physically here at Fota since the pandemic. We’re delighted to announce that the €5,000 raised will be donated to an on-site conservation programme for one of our native species, the Curlew.”

Ruairi Egan, Cheetah Run race director said “We at Eagle AC were thrilled to return to the wildlife park this year to host the real edition of our long-standing fundraising Cheetah Run, following two years of virtual events. The fact that it sold out completely once again is a testament to the uniqueness of the race and the popularity of Fota Wildlife Park. Our thanks go to all of our members who volunteered on the night, the staff of the park, all at Fota House and the OPW. Well done to all who took part on the night and it’s a pleasure to present this year’s donation.”

Monies raised and donated to Fota Wildlife Park by Eagle AC from Cheetah Runs in previous years have been used to support the Park’s native species conservation projects, including Ladybirds, Natterjack toads and the Corncrake.