Fota Wildlife Park has announced the birth of three critically endangered black and white ruffed lemur babies (Varecia variegatea) to mother Cloud who is nineteen years old and nine-year-old Fota-born dad Paraic. Fota Wildlife Park is calling on the public to help name the three youngsters, whose gender is still unknown, via the form below and be in with a chance to win one of three Conservation Annual Passes to Fota Wildlife Park. 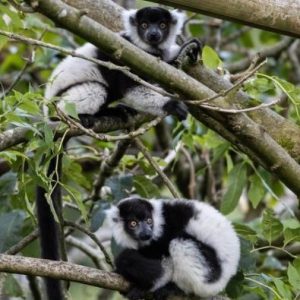 The three baby lemurs were born on the 3rd of June after a gestation period of 102 days. The new arrivals also share their island habitat on the main lake at Fota with their four older siblings, twin brothers Nimbus and Cumulus who were born in 2019, and brother and sister twins, Banie and Dubh, born in June last year. 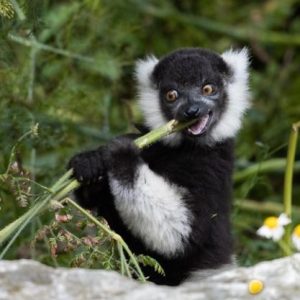 Lead Ranger Teresa Power said about the births: “We are delighted with the birth of three new black and white ruffed lemur babies, both the babies and their mother Cloud are doing well. Births in the Park are always exciting, but with 31% of all lemur species in Madagascar now critically endangered and 98% of lemurs threatened, to have such continued success with these critically endangered lemurs is tremendous and it’s a great indication of how happy and healthy these primates are here at the Park.” 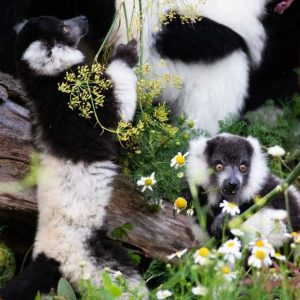 As with all lemurs, the species is native to Madagascar and the black and white ruffed lemurs are found in the tropical forests of Eastern Madagascar. The species is classified as critically endangered by the International Union for Conservation of Nature (IUCN) due to hunting and habitat loss and fragmentation. The Island of Madagascar has lost 90% of its forest cover in the last 200 years. This has resulted in 80% of its animal and plant life being in danger of extinction. There are less than 250 Black and white ruffed lemurs remaining in the wild today.

Ruffed lemurs are an unusual lemur species that display very primitive primate behaviour in that they build and give birth to their young in a nest. The young are almost naked at birth and are unable to cling to their mother, as in other primates. The female will often carry the young in her mouth when moving them from one nest to another, however, the young reach maturity more quickly than other lemur species.

These lemurs are also the world’s largest pollinator. When the ruffed lemur feeds on nectar, by sticking its long nose deep into the flower, the lemur’s snout becomes coated with pollen which is then transported to other flowers – making the animal an important pollinator of the Traveller’s Palm tree in Madagascar.

Fota Wildlife Park is asking for the public’s help to name the three new arrivals. Though the sexes of the new arrivals are not yet known, the Park is inviting individual name suggestions via their website to be in with a chance of winning one of three, year-long Conservation Annual Passes. To suggest a name for the new black and white ruffed lemurs please enter your suggestions in the form below:      (Image credits: Darragh Kane)