Fota Wildlife Park today welcomed Patrick O’Donovan, TD, Minister for the Office of Public Works (OPW) who officially opened the new Spider monkey habitat which was part-funded by the OPW. 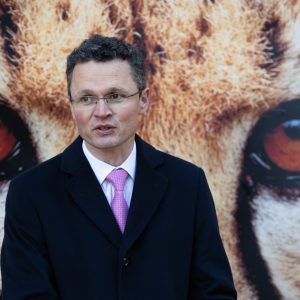 The OPW committed €1 million to essential capital infrastructural projects at Fota Wildlife Park. Other ongoing projects under this commitment include the Howler monkey habitat and the flood defence repair to the south sea wall.

Construction on the new Spider monkey habitat commenced in early 2020 but was temporarily suspended by the Covid-19 pandemic. The new purpose-built house has been designed with environmental sustainability and animal welfare in mind.

The state-of-the-art house features a four-meter-high ceiling that complements the animal’s natural behaviours. The building has underfloor air to water heating and glass viewing areas so visitors may see the Spider monkeys when they are indoors. The upgraded enclosure has been enhanced by extending the island habitat which is bordered by a water moat and accompanied by a new waterfall.

Minister Patrick O’Donovan said: “As Minister for the Office of Public Works, I am very pleased that we were able to step in and support Fota Wildlife Park during the exceptionally difficult time of the pandemic. I am delighted to see that the Government funding provided has enabled the progression of several important infrastructure projects and has contributed to the completion of the new Spider Monkey Habitat.”

Michael McGrath, Minister for Public Expenditure and Reform, who spoke at the opening said: “I congratulate the management and staff of Fota on this great facility. The extended and upgraded enclosure for these wonderful animals is a testament to the Park’s commitments to animal welfare and to the staff’s determination to recreate in so far as possible, a habitat close to the natural environment of these active monkeys. Fota Wildlife Park is a great day out and a fantastic educational resource for everyone to learn about the importance of conservation.” 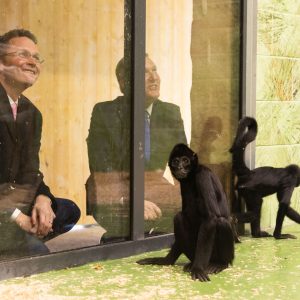 Sean McKeown, Director of Fota Wildlife Park said: “We are delighted to welcome Ministers O’Donovan and McGrath here today to mark the OPW’s contribution, which has made the continuation of our essential capital infrastructural works possible. The closure of the Park in 2020 due to Covid-19 and the associated loss in income meant that we had to halt or pause some key capital building projects such as the Spider monkey habitat and the south sea wall repair. We’d like to pay huge thanks to the Government and OPW for their commitment to Fota Wildlife Park. “

The southern sea wall refurbishment project is part of climate change mitigation measures that started in 2021 that include raising the sea wall by 400 meters and underpinning the sea wall base. This project alone cost over €630,000 which would not be feasible for Fota Wildlife Park to complete without financial assistance from the OPW.