The White-tailed Sea Eagle is the fourth largest bird of prey in the world and Europe’s largest bird of prey! It is closely related to raptors such as the hawk, kite, and harrier. This large raptor measures close to 100cm in length and has a wingspan of 2.5 metres. Its wings are broad and rectangular in shape giving them the nickname of “flying barn doors”.
Adult Sea Eagles are primarily brown in colour with paler heads and a distinctive white tail, while females are a third larger than their male counterparts. 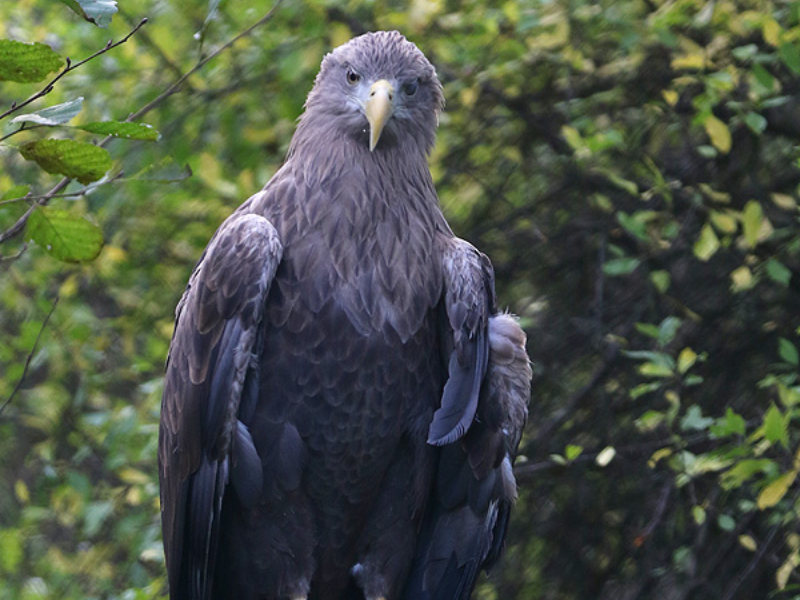 The largest population of White Tailed Sea Eagles is currently found along the Norwegian coastline, but it also inhabits areas around remote lakes and marshes further inland across Europe and Asia. In Ireland they are mainly found on the west coast with breeding pairs spread across Cork, Kerry, Clare, and Galway amongst other counties. Juveniles are more likely to be found inland. 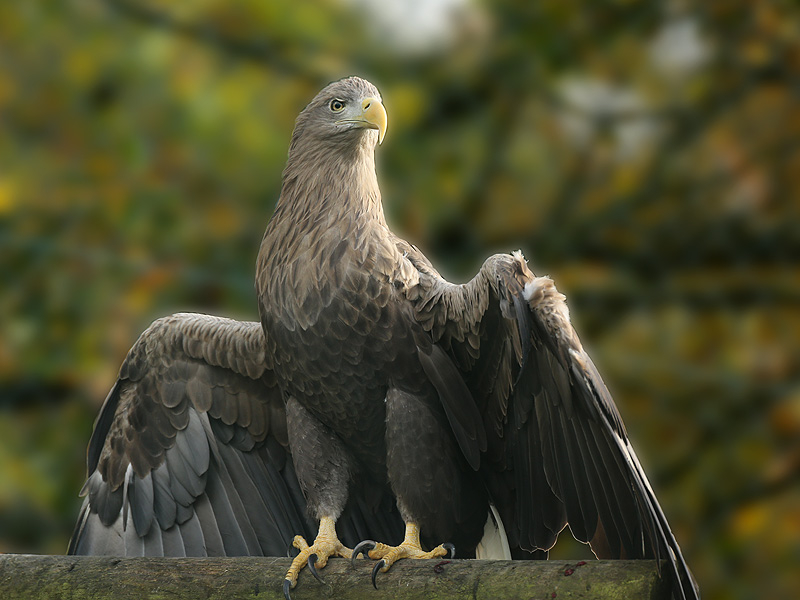 The Sea Eagle is a carnivore and feeds predominantly on a variety of sea birds, fish, and smaller mammals. It will also scavenge from the remains on dead animals (carrion),

It constructs large nests (eyries) of branches and twigs high up in trees or along cliffs, and the female lays an average of two eggs that are then incubated by both parents for about six weeks. The eaglets tend to fledge the eyrie after ten weeks. They are routinely fed by their parents until they are proficient at hunting for themselves. White-tailed sea eagles can live for 25-30 years with an average lifespan of 12 years. 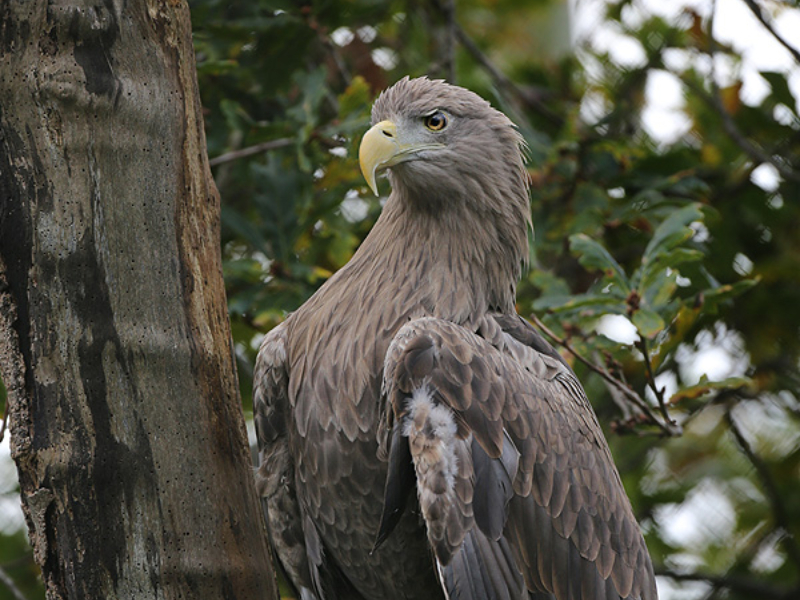 The White-tailed Eagle has been extirpated or locally extinct from the island of Ireland, with the last known native bird recorded in Co Mayo in 1912. The Golden Eagle disappeared around the same time. As an apex predator at the top of the food chain, Eagles are susceptible to secondary poisoning from their prey and also suffer persecution at the hands of farmers and gamekeepers, who considered them a threat.

The Golden Eagle Trust Limited currently manages two Eagle reintroduction programmes in Ireland – one for Golden Eagles in Donegal and another for the White-tailed Eagles in Killarney, Co. Kerry. The latter seeks to re-establish viable, self-sustaining, and breeding Sea Eagles in the south west of Ireland after an absence of over 100 years. 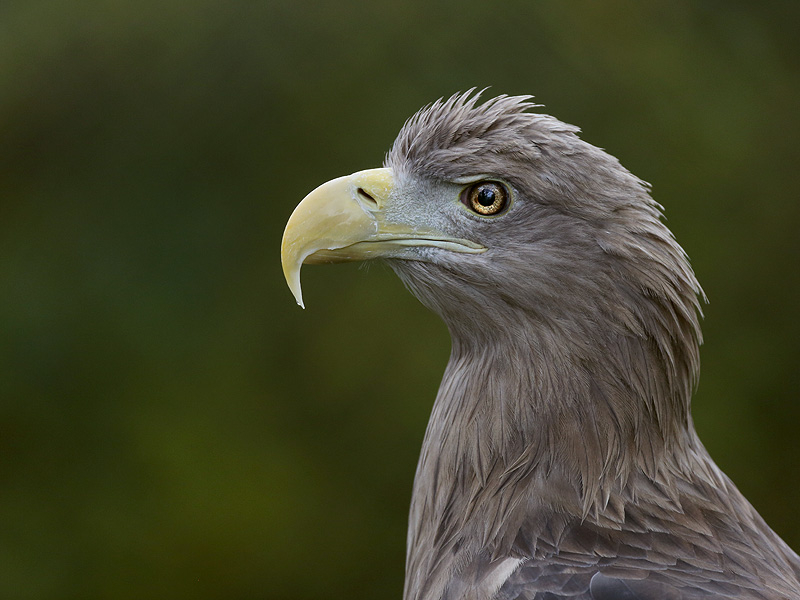 During the breeding season, while they are rearing young, Sea Eagles require 500-600g of food per day. This drops to 200-300g per day during the winter months when the birds are less active. 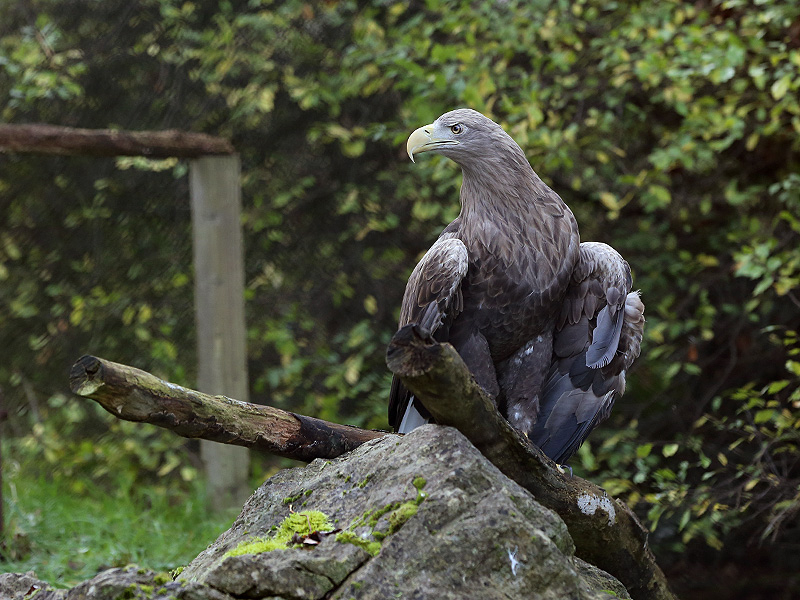 Fota Wildlife Park has been instrumental in highlighting the plight of the White-Tailed Sea Eagle since the arrival of the first breeding pair in 1991. While the programme is independent of the reintroduction programme being overseen by the Irish Government in Kerry, Fota has seen several White-tailed Sea Eagle chicks born in Cork over the years. A chick born to breeding female Maeve in 2011 was later released back into the wild near the Golan Heights in the Middle East. It is hoped the Park can continue to play a vital role in securing this species survival in Ireland.

The White-tailed Sea Eagle exhibit in Fota has been renovated in recent years to allow the species access to the adjacent seal enclosure. This allows for the species to fish for additional food in a similar manner to the way in which it feeds in the wild.