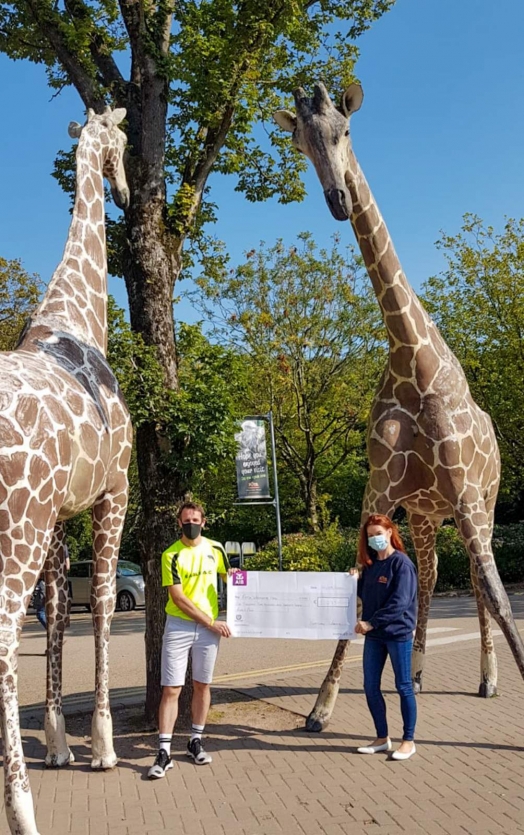 Many fans of Fota Wildlife Park will be familiar with the Eagle AC 5K ‘Cheetah Run’ race which has taken place in the park yearly since 2009 and has in recent years expanded to include a separate 1-mile fun run for younger runners. Usually an annual highlight event at the wildlife park, this year due to Covid-19, like so many events around the country, the races were unable to go ahead.

As well as being a fun and uniquely set run, it is also a fundraiser for us as the wildlife park is a not-for-profit organisation and the monies raised often go towards a specific conservation project.

As an alternative to the race this year the Eagle AC held a socially distant, virtual series of 5 mile races and funds raised were handed over to Fota Wildlife Park.

With a run held each month from May to August, one of Cork’s biggest athletics clubs, the Eagle AC committed to donate at least €1 for each run logged throughout the series to Fota Wildlife Park. A GoFundMe page was also set up in order for the club’s members to make a donation to the cause if they wished. Between the 4 races there were 293 runs logged. This, combined with the amount of €950 raised through the GoFundMe page reached a total of €1,243 being raised by Eagle AC for Fota Wildlife Park.

A big thank you from us here at the Park to both the Eagle AC and its members who contributed generously to the fundraiser in what has been a challenging year for everyone. The monies raised and donated to Fota Wildlife Park will be used to support some of the Park’s native species projects, including Ladybirds, Natterjack Toads and the Corncrake.

Video – The native Natterjack Toad is an endangered species of amphibian unique to West Kerry – this video shows a release of toadlets raised in Fota being released into their new habitat in Kingdom County earlier this summer.
The Natterjack toad is protected under the EU’s Habitats Directive and the National Parks and Wildlife Services has introduced a Head Starter programme in conjunction with Fota Wildlife Park and Oceanworld Aquarium Dingle- under which, toad spawn laid in pools that were drying out are transferred to Fota where they are reared in tanks before being released back into the wild. 2600 toadlets from Fota have been released under the head starter programme so far in 2020.