Fota Wildlife Park announced a first in its 39-year history and a first for Ireland; a baby Indian rhino was born on the 19th of September 2022, after a gestation period of 16 months, to mother, Maya and father, Jamil. 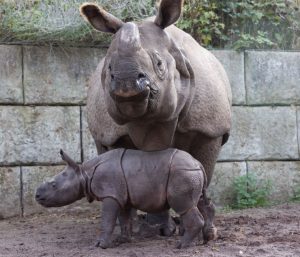 The yet unnamed male calf is the second of only three Indian rhino calves born in any zoological institution this year. The Indian rhino is listed as vulnerable by the International Union for Conservation of Nature (IUCN), with 3300 living in the wild. The illegal trade of poaching rhino horn for traditional medicine poses the biggest threat to the species. 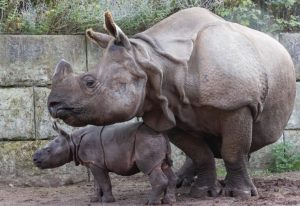 Maya was born in Rotterdam Zoo and is almost ten years old. She came to Fota Wildlife Park in early 2020, just before Covid-19, as part of the ex-situ European Endangered Breeding Programme (EEP) from the French Zoo, the Botanical Garden Branfér, Nantes. She is the only female Indian rhino residing in any Irish zoological organisation.

Jamil, who is nine years old, was born in ZSL Whipsnade Zoo in the UK and came to Fota Wildlife Park in June 2015. Both rhinos weigh approximately two tonnes each. 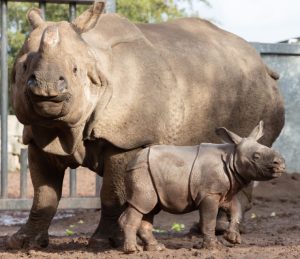 Lead Ranger Aidan Rafferty said, “Fota Wildlife Park is delighted to announce the first baby Indian rhino, hopefully, the first birth of many to come. Both mother and baby are doing really well. Maya is very protective and is constantly by his side. We’re delighted to see the little calf running around and playing. He is an absolutely gorgeous animal, and he’s getting stronger and more curious every day.

“At the moment, he’s not on view very often to the public as he’s inside the Rhino house with his mother and is gradually getting accustomed to going outside for brief periods. The best opportunity to see him is later in the afternoon. As he gets older and stronger, he’ll be introduced to the remainder of the Rhino habitat, which features grass meadows, mud pools and a lake area.” 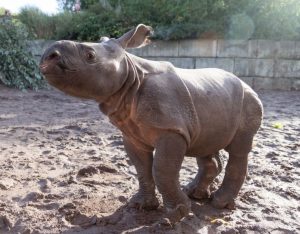 Rhinoceroses are the largest land mammals after the elephant and are made up of five species, two African and three Asian. The Indian rhino is the largest rhino species and is also known as the greater one-horned rhino.

The Indian rhino possesses highly distinctive armour-like skin and a single horn that can be up to 60cm in length, making it an easily recognisable animal. Its single horn distinguishes the Indian rhinoceros from its African counterparts, who possess two horns.

The one-horned Indian rhino, once widespread throughout parts of Asia, suffered population decimation due to hunting and poaching and was close to extinction at the start of the 20th Century. Nearly 85% of the global Indian rhino population is concentrated in Assam province, India, with 70% of this population in the Kaziranga National Park. Of the other two Asian rhino species, about 100 Sumatran rhino and less than 50 of the Javan rhino are left in the wild.

There are now four Indian rhino at Fota Wildlife Park, Maya, Jamil, the new calf, and a non-breeding male, Shusto.

The naming competition in now closed. Winner to be announced on social media shortly.