Lead Ranger, Kelly Lambe said about the new arrival “We are thrilled to welcome Matheo to the collection of animals here in the Tropical House at Fota. We also recently added Seahorses who have been very popular with the public, and we are expecting Matheo the sloth to be equally as popular with visitors. This is the first time we have had a sloth reside in the Park and so far, he’s been settling in exceptionally well. Although they are primarily nocturnal animals – in fact, they can sleep for 15 hours a day easily, he has been quite active so far. Matheo has been making regular trips out of his nesting box into his specially constructed high-level branches and platforms in the Tropical House – where he is essentially free roaming. Male sloths are solitary outside of the mating season so his new habitat at Fota will suit his needs very well. ” She added, “His arrival from Germany and his initial acclimatisation to the Tropical House have been filmed by Red Pepper Productions for Virgin Media Television for a four-part documentary series to air soon – so we look forward to Matheo’s appearance across the nation’s TV screens.” 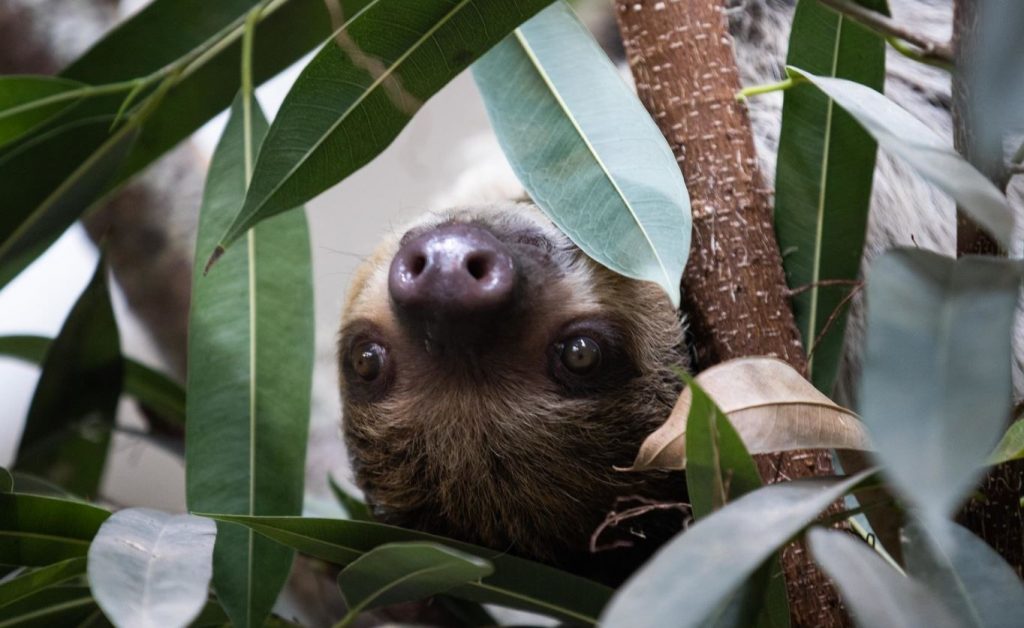 Sloths are slow-moving, nocturnal creatures that spend almost their entire life suspended from trees. The only time sloths descend to the forest floor is to go to the toilet, which they do about once a week. To move to a new area of trees, sloths often have to wait for the forest to flood which facilitates swimming to a new resting site.
A native of South America, sloths eat, sleep, mate, and give birth from their upside-down position high among the branches. Sloths are the only mammals whose hair grows in the opposite direction from the hair of other mammals. To accommodate their upside-down lifestyle, the hair parts in the middle of the belly and grows upward towards the back. The hair on the face points upward, allowing water to run off during rainstorms.
The impressive biology of a sloth allows it to spend 90% of its life hanging upside down. Studies show that this is made possible because their organs are attached to their rib cage, which means they don’t weigh down on the lungs. This means that, unlike us, a sloth can hang upside down with no effect on its breathing. An average day for a sloth entails sleeping for 15-20 hours and it spends the remaining nighttime hours searching for food.
Their diet primarily consists of a variety of leaves, stems, buds, and a selection of fruit but insects are also consumed. This kind of diet requires a specialised digestive system and sloths possess a large, four-chambered stomach, like cows. Bacteria in its gut helps to digest the large amount of plant matter that forms its diet. Due to the low nutritional value of their leafy diet, sloths are slow to exert themselves unless necessary. Predators such as jaguars and ocelots, harpy eagles, and anacondas pose a threat to sloths in their native habitats. They defend themselves with their sharp claws and teeth and if required, sloths can move quickly through the trees to evade capture.

The Tropical House at Fota Wildlife Park was opened in June 2014 and was funded by SECAD (South & East Cork Area Development). The Tropical House is home to reptiles, amphibians, butterflies, exotic fish and a state-of-the-art veterinary facility which allows for injured or sick animals to be treated onsite at Fota Wildlife Park. For further information see www.fotawildlife.ie