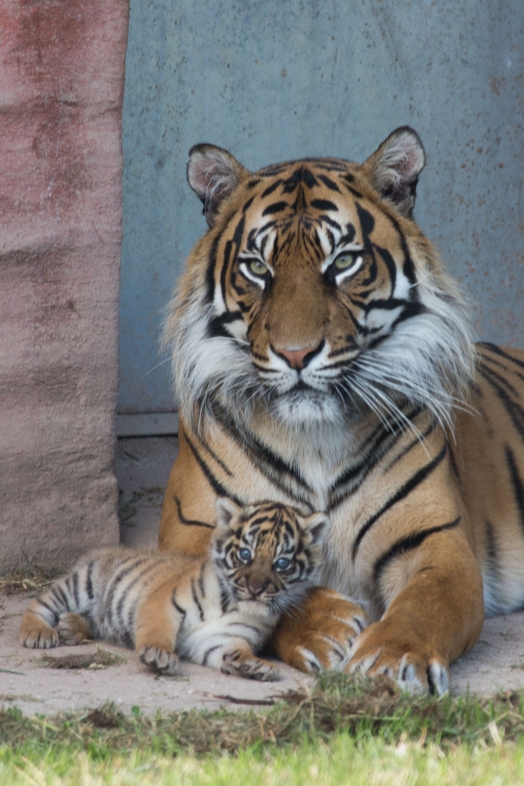 Fota Wildlife Park today announced the birth of a Sumatran Tiger cub which is one of the rarest subspecies of tiger in the world and was classified as critically endangered by the International Union for Conservation of Nature (IUCN) since 2008. The cub was born on the 7th of May to first time parents, five-year-old mother Dourga and father Denar who is also five. Although the Wildlife Park do not yet know the sex of the cub, they are calling for the public to suggest a name beginning with ‘D’, this can be done via the survey below. The person who has suggested the chosen name will be in with a chance to win a yearlong Conservation Membership to Fota Wildlife Park.

Sean McKeown, director of Fota Wildlife Park said: “This is a landmark birth for us – apart from the fact this is the first time that a tiger has been born in Fota, but also because this subspecies is so vulnerable to extinction as there are as few as 300 to 500 individuals remaining in the wild. The Sumatran Tiger is Indonesia’s last tiger subspecies and it’s being pushed further and further towards extinction due to the devastation of their natural habitats, conflicts with humans and the deadly trade that poachers purvey. Therefore, anything we can do to contribute to the continued survival and genetic diversity of this subspecies is vitally important. The birth of this cub will help raise the profile of the plight of the Sumatran Tiger and further educate the visiting public for the need to conserve this beautiful and endangered species”.

Kelly Lambe, Lead Ranger had this to say about the new arrival: “Dourga and Denar hit it off from the start with lots of friendly chuffs or vocalisations exchanged during their initial courtship. We are delighted to welcome this beautiful new addition to the Park, who will be a valuable member of the larger tiger family therefore helping to ensure the survival of the species all whilst being incredible cute!”

As part of the International Tiger Breeding programme the new parents arrived to Fota Wildlife Park’s Asian Sanctuary in March of 2014. Mother Dourga originally came from Le Parc des Félins in France and father Denar from Warsaw City Zoo in Poland. They now share their habitat with two other Sumatran tigers; Batak, a three-year-old male that came in 2015 from Zoo Parc de Beauval in France and Mayang, a five-year-old female who arrived last week from Safari Zoo in the UK.

Fota Wildlife Park are sponsoring the 21st Century Tiger poaching prevention programme in Sumatra as part of their ongoing contribution to wild tiger conservation. To date Fota Wildlife Park has raised over €27,000 for wild tiger conservation, which has earned the Park a Gold Award from 21st Century Tiger, which is an initiative to conserve tigers in their wild habitat.

To be in with a chance to win a year long Conservation Membership – please suggest a name beginning with ‘D’ – after the mother and father, Dourga and Denar.