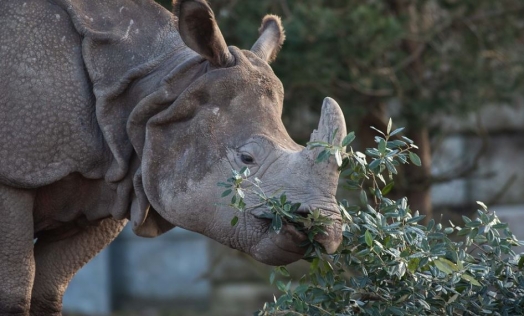 In previous years we used to fundraise by running ranger talks and asking our visitors to guess the weight of one of our Rhinos but this year we have gone online and we donating 100% of our web donations to the conservation charity, Save the Rhino

To donate, please go to Savetherhino.org.

There are three Indian Rhino at Fota, two are males, the seven-year-old Jamil who came from ZSL Whipsnade and nine-year-old Shusto who was transferred originally from Benidorm’s Terra Natura. They were joined in early 2020 by a female Rhino, the seven-year-old female Indian Rhino, Maya, who arrived at the Park on the 23rd January from the French Zoo, Botanical Garden Branféré near Nantes. Maya was originally born in Rotterdam Zoo; she weighs almost two tonnes and she currently is the only female Indian Rhino residing in an Irish zoological organisation.

The Indian Rhino is also known as the greater one-horned rhino and is listed as vulnerable by the International Union for Conservation of Nature (IUCN). Fota has been granted approval from the European Association of Zoos and Aquaria (EAZA) to participate in the breeding programme for this species for Maya and Jamil.

Rhinoceroses are the largest land mammals after the elephant and are made up of five species, two African and three Asian. A fully-grown adult can weigh up to 2200kg- which is over two tonnes of weight. In terms of conservation, the situation has improved for the Indian Rhino which, like the other species was under threat from poaching, in particular for their horn, and habitat loss. The wild population has gradually grown in the last 100 years across the Indian subcontinent from 1,800 in the early 1990s to over 3,330 in 2019.

Today is World Rhino Day, if you would like to donate to our approved charity, you can do so through our donations pages -all funds raised today will be going to Savetherhino.org.